Sky's Not The Limit For Arduinos In Space

'Arduinos In Space' could be the tagline for the two microcontroller (MCU) products that are the topic of tonight's post -- Ardulab and ArduSat.

First off, Ardulab. Although some may find it a skoosh misleading, SpaceRef's July 25 article about an Arduino in space is titled, "Infinity Aerospace's Ardulab Makes Building & Launching Space-Certifiable Hardware As Easy As Baking Cookies." I baked cookies tonight. Oatmeal-raisin cookies. They tasted good. Baking them was more difficult than walking across the street and buying cookies from the North Coast Co-op. But it was much less challenging than building and launching space-certified hardware. On the other hand, baking cookies was also definitely much less rewarding and interesting than launching space hardware.

Ardulab projects are intended to democratize the hardware needed to perform experiments on the International Space Station. According to the SpaceRef article,


"Today Infinity Aerospace announced the complete open-sourcing of Ardulab, the Arduino powered platform for building and launching simple experiments to the International Space Station. Previously costing space researchers, students, and experimenters between $2,000 - $3,500 per kit, anyone can now build and launch an off-the-shelf space-certifiable experiment, with the only costs being building their equipment and launching it. When it was originally conceived back in 2012, the fundamental idea behind Ardulab was to give as many people as possible the tools and information they need to be successful in space. Making Ardulab a completely open-source platform allows for all of the intellectual property to be used to its full extent. The Ardulab is a plug-n-play electronics platform with all of the necessary features and interfaces for use on the International Space Station."

It seems like Humboldt creative minds could come up with a few unique and worthwhile space station experiments. Maybe something involving redwoods in space. After all, there are already redwoods growing on the Humboldt State University (HSU) campus grown from seeds that orbited the moon in 1971. Using the Ardulab platform, the Humboldt Microcontrollers Group could help build the hardware for the experiments that get accepted by NASA (National Aeronautics and Space Administration). Or the MCU group could help organize a design competition for an Ardulab project. That might be a fun and effective way to get Humboldt students interested in learning how to design and build Arduino-powered projects and might also get them interested in space. It would just be a extra bonus if one of the Humboldt Ardulab competition projects was accepted by NASA to be sent up to the space station. Maybe the end result would be that we'd have another batch of aerospace redwoods growing on the HSU campus.

The second 'MCU in space' item for tonight's post is the ArduSat. The backstory for ArduSat, designed and built by the space startup NanoSatisfi, is an intriguing one if you're interested in how a microcontroller project went from a concept to company that just received $25 million in funding. The backstory can be told as a couple guys that designing a cool, innovative and useful piece of technology in a California garage -- the Singularity Hub article "Space Exploration On The Cheap: Kickstarter Sensation NanoSatisfi Launches in 2013" says:


"NanoSatisfi is based out of a collective workspace provided by tech incubator, Lemnos Labs, and situated near the ballpark in downtown San Francisco. Upon arrival, one is greeted by a nondescript front door sporting a few haphazardly labeled buzzers...NanoSatisfi doesn’t have a buzzer—Lemnos Labs is in the garage."

Or the backstory can be looked at from a different perspective that seems a bit less grassroots bootstrapping, with the same Singularity Hub article explaining that:


"Singularity Hub asked Peter Platzer, co-founder of NanoSatisfi, to elaborate...Platzer began his career as a high-energy physicist at CERN [Conseil Européen pour la Recherche Nucléaire; same place the Internet was 'invented']...After CERN, Platzer went to Harvard to get his MBA and wound up running a $500 million quant fund on Wall Street."

The Wikipedia entry for ArduSat has a timeline for the project, but the big picture is that NanoSatisfi ran a Kickstarter campaign for the ArduSat and got over $100,000, about three times what their original funding goal was. They followed that up by raising over a million dollars more. Apparently that wasn't enough money to successfully launch that ArduSat, because they just announced today, July 29, that they have raised $25 million and changed their name from NanoSatisfi to Spire, Inc. 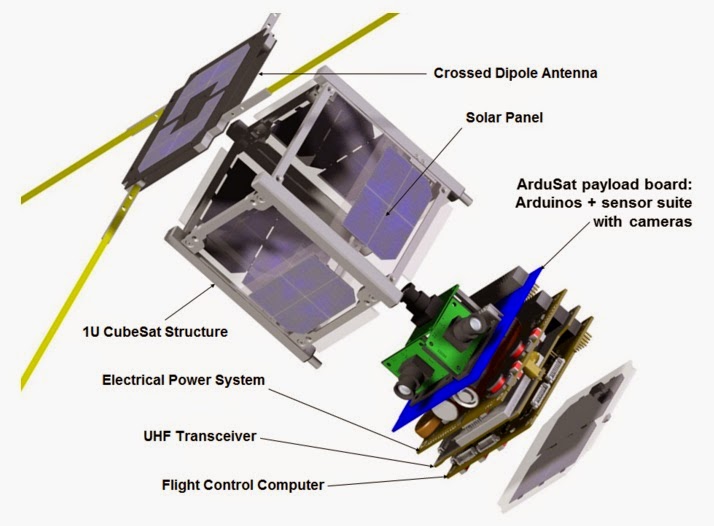 
"ArduSat is an open source, Arduino based Nanosatellite, based on the CubeSat standard. It contains a set of Arduino boards and sensors. The general public will be allowed to use these Arduinos and sensors for their own creative purposes while they are in space...ArduSat is the first open source satellite which will provide such open access to the general public to space."

If there are a few civilian space enthusiasts in Humboldt, we could pull together a complex, interesting, challenging and fun project or competition involving both Ardulab and ArduSat, two MCU-controlled projects that Humboldt people could work on. That's one project that would truly be out of this world!