I'm not a gamer, but I still think it would be fun to make and test drive Adafruit's recent microcontroller (it uses an Arduino Micro) project titled "3D Printed Wearable Video Goggles." 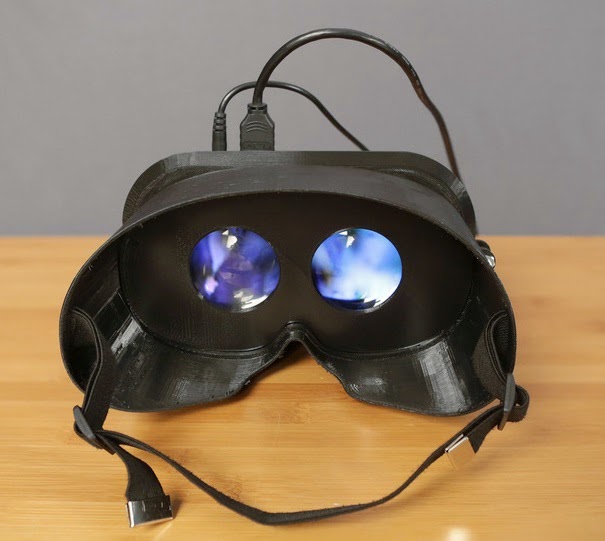 There are three reasons I think this would be a good project to work on.

Ninjaflex is a relatively new 3D printing feedstock. A May 2014 post on 3D Printing Industry profiled the Fenner Drives material, which seems like a typical 'maker' story.

"Until recently, prototyping flexible components was a time-consuming and cumbersome process,” said Fenner Drive product development engineer Stephen Heston “It was a big gap in the market, because so many engineered products utilize elastomeric parts.  Without materials that closely approximate the properties of the end product, it is impossible to create truly functional prototypes.” After discovering that 3D printing enthusiasts were trying to use existing Fenner Drives belting material as filament, Heston found that while it was not an ideal material in its current form, with a few months of tweaking it soon could become one. The final product has a textured surface that allows it to be used in most 3D printers with a spring loaded extruder...Most impressively however is the replica of a small child's defective heart that surgeons in Kentucky recently 3D printed using his CT scans. By printing a model one and a half times the actual size from a highly flexible material, the doctors were able to pre-visualize the best way to repair the defect without having to perform the risky surgery blind. The fact that the model only cost about $600 and most likely saved a small child’s life is actually pretty incredible. It also would not have been useful to the doctors if it had been printed from a less flexible material. You can watch the local news story here."

This YouTube video about Ninjaflex gives a pretty good idea of what the material is like. Of course, like all new materials, Ninjaflex is not without its particular challenges. On the LulzBot webpage for Ninjaflex, they say:

"The flexibility of this material makes it nearly impossible to print using a standard extruder, so we've designed the Flexystruder, a Greg's Wade-style extruder that fully constrains flexible filaments like Ninjaflex, which is available for purchase here!"

Both PLA and ABS (acrylonitrile butadiene styrene) can be tricky to 3D print with, so I imagine there's a definite learning curve for the Ninjaflex, especially if you are using a standard 3D printer extruder and LulzBot is correct about the difficulty of printing it with a standard extruder. Before trying to print the Adafruit goggles, it would pay to make a few test prints with the Ninjaflex by
itself, then a few test prints laying Ninjaflex down on top of a PLA base.

Adafruit did a 'Layer By Layer' post about the goggles, in which they give lots of graphics showing different sections of the 3D build and throw in a few project tips, like:

"Adjust the overall size of the goggle frame by editing the curves that make it up. Measure your forehead, cheeks and nose to adjust the cylinders that make the cuts into the hood...Adjust the goggle hood shape by editing each cylinder. The bigger one controls the forehead shape. Measure the depth and width of your head to get a general size for the hood."

The only 3D printers I know in Humboldt are Justin Tuttle and Shawn Dean of InPrinting. I've been told there are 3D printers at Humboldt State University and at College of the Redwoods, but I haven't met them yet. One or both of them may have already printed with Ninjaflex -- I'll have to contact them to find out if they have, and if not, maybe they'll be interested in getting some and trying it out. 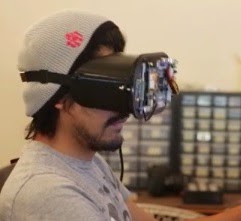 The third reason I think the Adafruit goggles would be a fun project is because I've never worn a head-mounted personal monitor. I'm not so much interested in the gaming aspect, although I would like to check out some older computer games on various ancient emulators such as an Apple II or Apple IIgs. But the main reason I'd like to try the goggles is to see how engaging the head-mounted and enclosed display would be when watching videos or movies. It seems like it would be either really enjoyable or very restricting. Who knows -- maybe I'll get the chance to find out!