The Humboldt Makers Group had a tech demo and information table today at the 'Humboldt Makers Street Fair,' an arts and craft fair in Eureka, California. 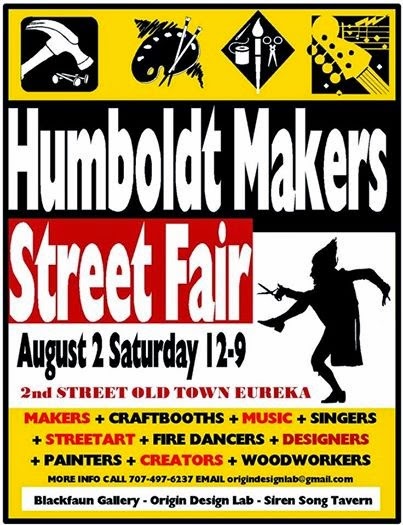 The arts and craft street fair was organized by Origin Design Lab from Eureka, and it was the 4th annual fair for them. Several blocks of 2nd Street in the Old Town section of Eureka hosted arts and crafts booths and a variety of local musicians. The Humboldt Makers Group had a table there to raise the visibility of the group in the local community and to encourage participation in the Humboldt Makers monthly meetings from 6 to 8 PM at 1385 8th Street in Arcata. We also had the brand new Humboldt Laser Harp (HLH) on the table to amaze and entertain passersby.

Although most of the public walking around to the different booths and tables appeared to be tourists or shoppers looking at the arts and crafts for sale, rather than makers, it was worthwhile for us to have a table at the event. We did talk with a few people who seemed interested enough in the maker group to come to future monthly meetings. These interested people ranged from young students who wanted to learn about electronics but didn't have much money or drivers license to people who took a smartphone picture of the Humboldt Makers Group sign and said they wanted to come to meetings to people who seemed interested in the makers but didn't appear committed to getting involved with the group.

Having these people stop by the table to talk with us simply reinforced what I've found to be true in many places. Every maker event and tech unconference I've participated in over the past ten years has involved talking with people at the event who say they just heard about the event (which was of high interest to them) the day before, or they ask how long we've been around and why it's so hard to find out about us, or they tell me they were sure there were no other people like them (a maker or a tech enthusiast) in the area because they sure didn't know of any. I'm firmly convinced that a combination of three things can greatly strengthen and expand the community of makers or tech enthusiasts in an area.

No one I talked to at today's event knew what the 'maker movement' is and only a couple had heard of the Maker Faire in the Bay area. This was partly because people at today's event were there for an arts and craft street fair. But the lack of awareness also shows a need for more promotion and education about 'makers' and 'Maker Faire.' A dedicated core group of people can greatly raise the visibility in Humboldt County of the maker movement, but we one or two new people in the group who are good at marketing and promotion, and we need sponsors that enable us to effectively promote the Humboldt Makers Group.

The HLH demo went fairly well, especially considering that physical construction of the harp was started last week, and it first became playable yesterday. Having an outdoor, midday venue to demo it also presented challenges, especially in terms of the changing sunlight affecting the light sensors and their correct calibration. Concerns about burning out the 'dollar store' lasers used in the HLH caused us to periodically power down the lasers to try and make them last longer. Powering down the lasers creates an interesting phenomenon. Within ~ two minutes of powering down the lasers, someone would come to our table and ask "What's the Humboldt Laser Harp?" Which, of course, meant we had to power them back up! It was worth it though, because it was fun to watch them play the harp and be amazed at how it works. A robust and versatile harp will be an excellent promotional tool for the Humboldt Makers Group and should be displayed to the general public as much as possible.

Ed Smith and I thought of quite a few improvements we'd like to make on the Grip-Strut version of the HLH. Ed is much more familiar with both the hardware and software of the HLH than am I, so I'll let him explain to Nick and others what will be most effective at improving the HLH. However, below is my understanding of HLH stuff we should figure out and work on. 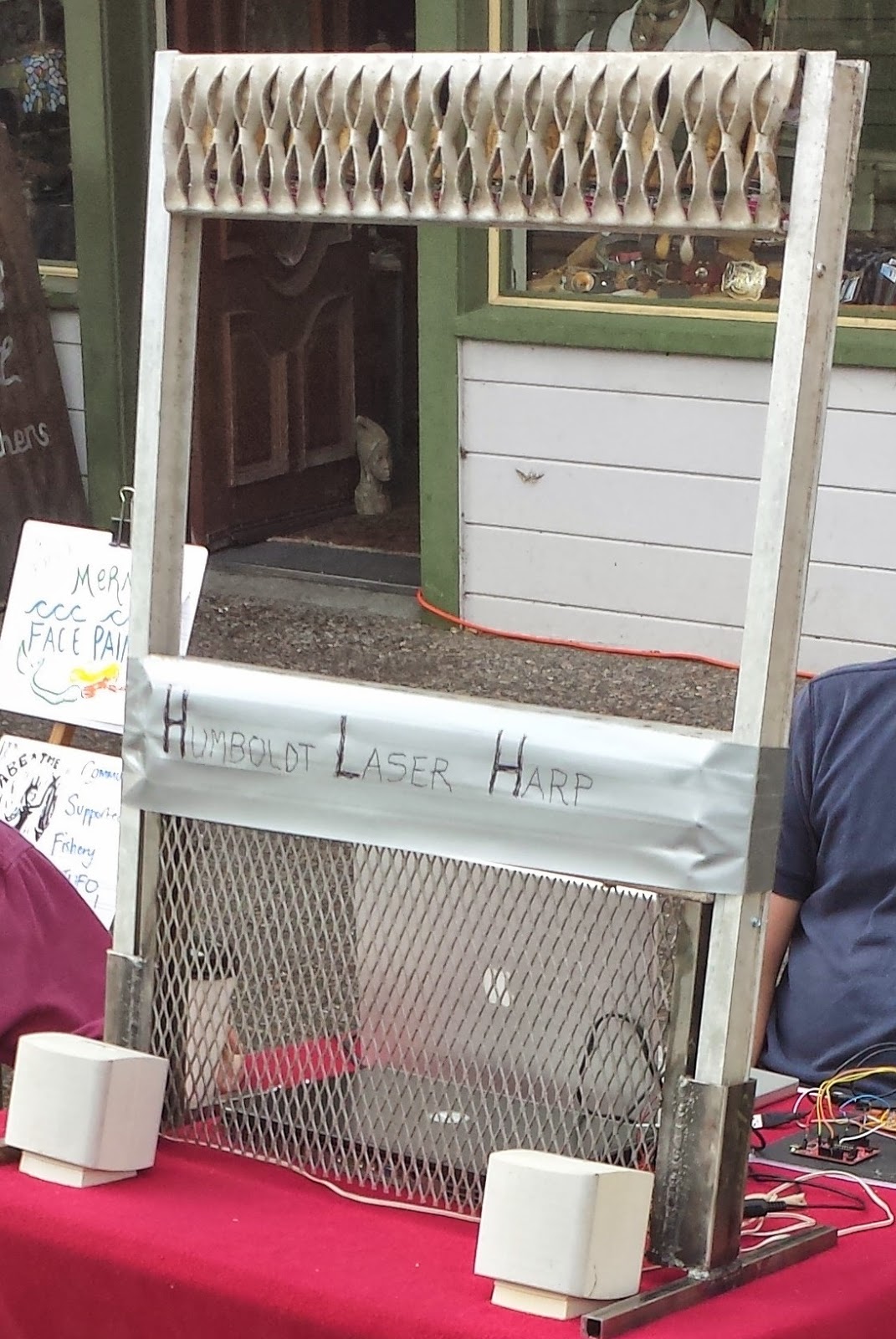 We'll probably have the HLH at next week's Humboldt Microcontrollers Group meeting on Thursday. So if you want to see it in action (and hear it in action), or if you want to contribute in some way to the HLH group project, consider participating in this Thursday's meeting.