The August 21 article "Arduino Motor Shield, Arc-Controller Launched By Arc Robotics" gave me a good reason to do a little research on microcontroller (MCU) motor control and motor shields.

The article covers the Arc-Controller, a new high capacity motor shield that has a Kickstarter campaign in progress, telling us:


"Maker, developers and hobbyists that enjoy building Arduino platform based projects might be interested in a new Arduino Motor Shield called the Arc controller which has been created by Arc Robotics...“There have been a lot of amazing projects come out of the Maker revolution, however, many are limited by the capability of their motor controller. We want to change that. The Arc-Controller is a bridge to bring high Amp motor control to your projects, up to 43 amps with a heat sink. It is capable of variable speed and direction control over a single Stepper Motor or two DC motors, because when do you only need one motor. The Arc-Controller is compatible with about any Arduino, or other micro controller such as Raspberry Pi. It runs an ATMega328, and is user programmable via the Arduino IDE." 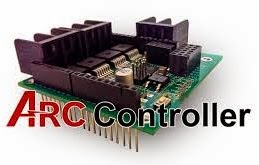 The Kickstarter campaign still has 36 days to go, but it has gotten off to a very slow start, with only $927 pledged of the $41,500 funding goal. According to the Arc-Controller Kickstarter page,


"The Arc-Controller built around two H-Bridges. Each one can supply 43 amps of continuous current, with a properly mounted heat shield. The dual H-Bridges run separately, controlling two high-end DC Motors or as one controlling a single stepper motor. Built into the H-Bridges are current and temperature fail-safes.  If they begin to get too hot, or if they exceed the maximum current levels, current limiting will take affect. They will automatically shut down until they cool off, or until conditions are safe to operate. We also have included a reverse polarity protection...There is an integrated circuit on board that gives a current reading from the H-Brides to see how much current each individual motor is using. This gives you the option to write your sketches to react under certain loads, detect shorts and over heating states...We are creating a simple library that can be used to easily send commands to the Arc Controller. These commands can configure the Arc Controller to run a stepper motor, drive two brushed DC motors, and even an integrated an XY thumb stick “Arcade Drive”. The interface library will take input from you and transmit it to any number of connected Arc Controllers...We have had lots of success with tank style robots to the point that we made it run on two wheels until you want it to act like a tank. then it will lay down and drive like a tank. We have many theoretical uses, that we are eager to try such as: home made Segways, drive-by-wire go-karts, RC lawn mowers..."

There are a fair number of existing motor controllers for Arduinos if the Arc-Controller is overkill
for your needs. Here is a sampling of what's available for Arduino:

If you use large motors or lots of motors on your MCU projects and could really use the Arc-Controller, you may want to head over to their Kickstarter page and support their campaign. If you know of other motor shields that do pretty much the same thing, send an email to arcatabob (at) gmail {dott} com and let me know what you use or recommend, and I'll update the post with that info.