[Tonight's post is by Ed Smith, a member of the Humboldt Microcontrollers Group]

I just received a Texas Instruments (TI) MSP430FR5969 LaunchPad! This is my unboxing post, I'll also cover updating the onboard programmer's firmware for use with Energia.

We'll kick things off with a few specs, or at least a quick product description. This is an unboxing not a review, after all.

The MSP430FR5969 MCU is aimed at extreme low power consumption, to the point where when it is operating at full power it consumes ~100µA/MHz. That's quite low; at 16MHz it's consuming a measly 1.6mA. In the various sleep modes the power draw is measured in handfuls of micro-amps, and in deep-sleep it even gets down to nano-amps.

The FR5969 LaunchPad takes that MCU and gives it a home, as well as a built in programming interface, breakout headers (with very nice labels, as we'll see later), buttons, LEDs, lots of jumpers, and a 0.1F supercap. That's not µF, that's not mF, that's a tenth of a Farad, something that would have cost a tremendous amount of money a decade ago.

The box is a simple affair, nothing especially flashy other than the rocket logos. Even those aren't flashy per se, not compared to modern marketing anyway. It's a sturdy box, I approve. 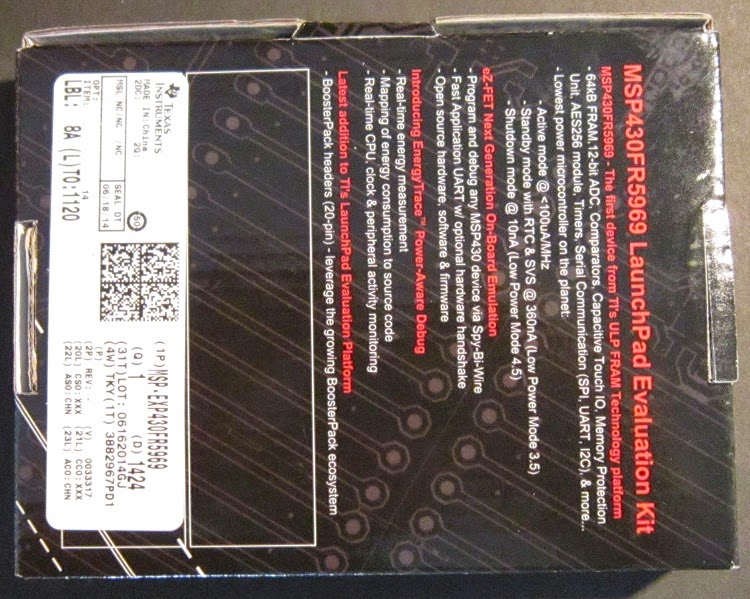 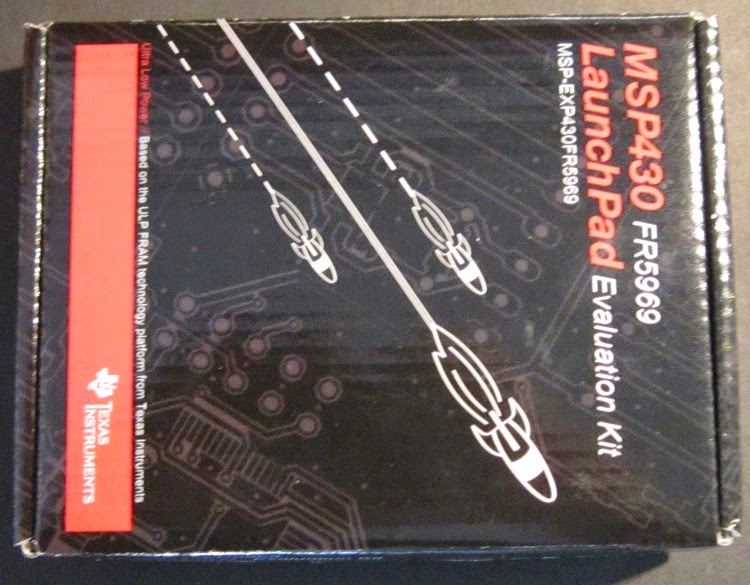 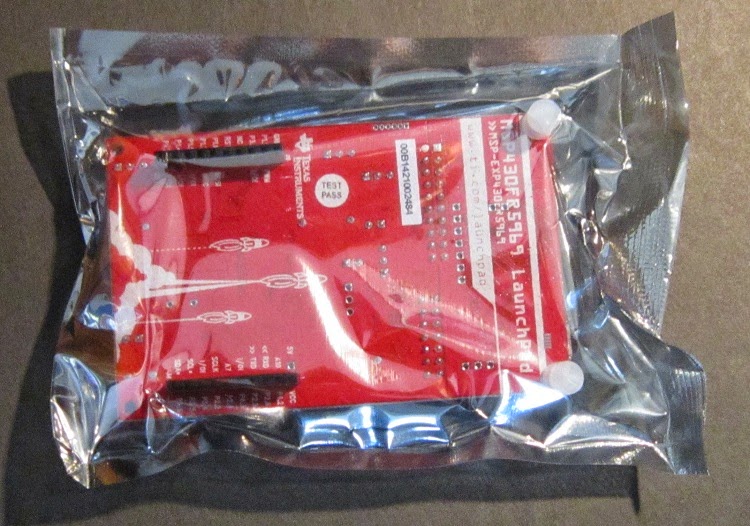 Inside the box we find, not surprisingly, an anti-static bag with a LaunchPad in it! There actually is a surprise in here, I'll focus on it later.

This is the bottom of the board, in case you hadn't guessed. 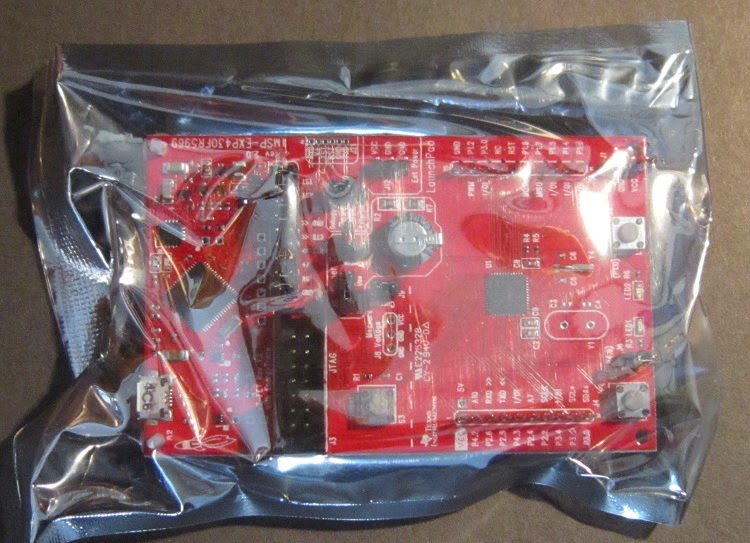 Here we have the top side, there are hints of greatness here too.

The last thing in the box is a beefy mini-USB cable, to connect the LaunchPad to your computer for programming and/or power. It's very nice of TI to include this, and I appreciate it. 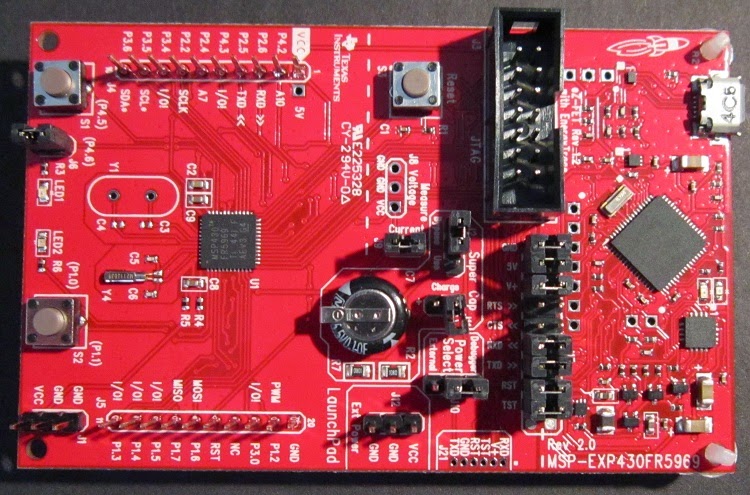 Out of the bag we get more detail, we can see the two user buttons plus reset button, a wide array of jumpers for controlling how much of the MCU core is connected to the debug/USB/power side of the board, as well as the supercap and two user addressable LEDs. Note the amount of text near the headers! 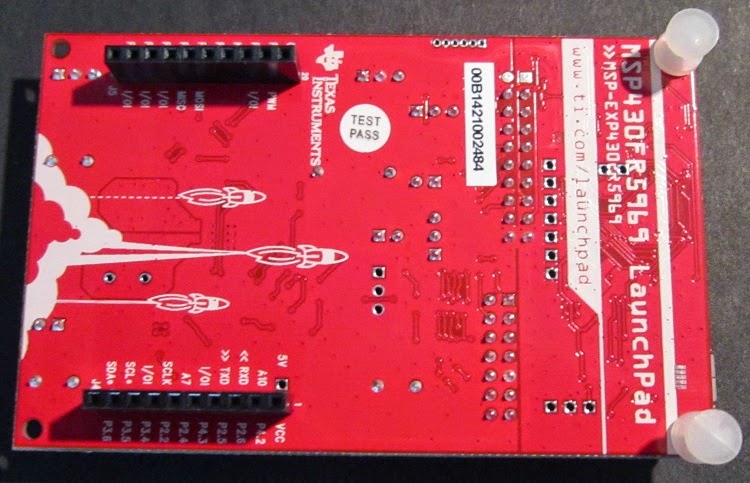 On the bottom there are two things I really, really like. One is the amount of pin information printed near the headers, I'll zoom in on it in a bit. The other is the plastic standoffs. This is something lacking in the vast majority of dev boards out there.

The board sits nicely on the standoffs and bottom headers, no worries about short circuits to metal tables no MCU tipping over when you try to plug something in. It's a small thing, but I appreciate it. 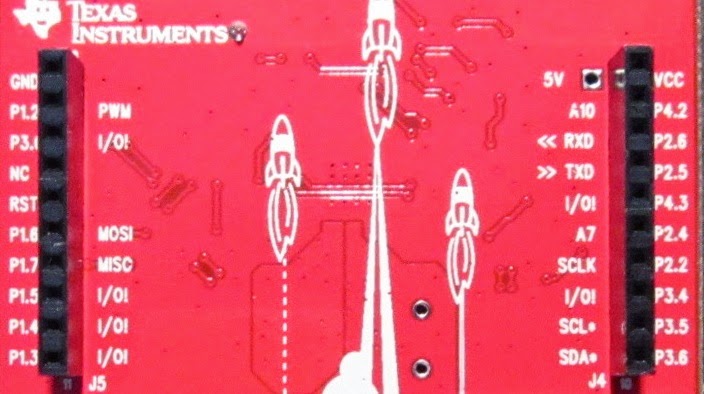 The silkscreen on both sides of the board is very informative, it gives you plenty of options for charging or not charging the supercap, using or not using the supercap, current monitoring, voltage monitoring, USB power or external power, etc. It also has significantly more pin information next to the headers than one usually sees. Not only the port numbers, which is standard, but also designations as to which pins do what. Serial TX and RX are marked on most boards, MOSI/MISO/SCK(SCLK) for SPI and SCL+/SDA+ for i2c are not usually marked, and they are here. This cuts down on the amount of time needed looking at datasheets and pinout diagrams substantially. I dearly hope that other companies will follow TI's lead here; they seem to be thinking about the end user.

All is not roses with the FR5969 LaunchPad however. Maybe it is roses, and we're getting to the thorns now. In any event, there are two revisions of this MCU. The first revision to come out, and the new Energy Trace revision. Energy Trace adds a solid set of features to check where the energy is going, but it also requires a newer firmware version for the on board programmer. Unfortunately for some reason or another it doesn't seem to have made it on to the first round of Energy Trace boards! On the plus side, updating the firmware is fairly easy.

This guide assumes you're going to be using Energia to do your programming, or at least your firmware updating. Code Composer Studio also ships with an updater I believe, and you can download a standalone command line updater as well.

The first step is to open Energia and find the Update programmer menu. It's under the Tools menu and is not hard to find.

You will need to run this a few times, as there is a bug in the update script somewhere that times out after updating one device, and there are three devices on this board that need updating.

For the moment, run it until you start getting errors. I was able to update two out of three devices without any further effort.

Once you start getting errors you will need to close Energia and download the TI MSP430 Flasher utility, the command line program I mentioned above, you can find it here:
MSP430 Flasher Link 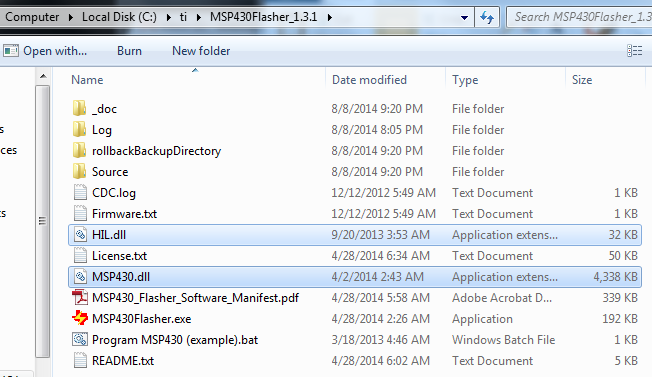 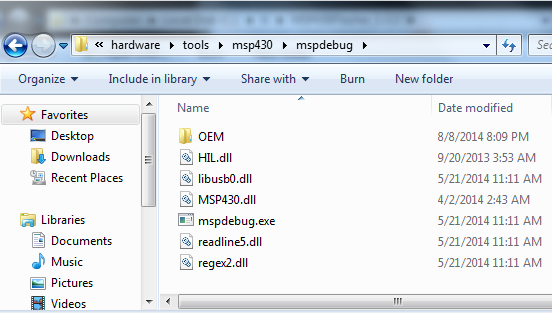 Once you find the two directories you want to copy HIL.dll and MSP430.dll from MSP430Flasher into Energia's mspdebug directory. Backing up Energia's copies of those two files isn't a bad idea, I created a directory called "OEM" and moved the originals into it, then copied the new HIL and MSP430 dlls.


Once you have copied those two files, re-open Energia (if you didn't close it before, close it and re-open it) and run Update Programmer again. Instead of throwing errors it should happily update the remaining piece of firmware. If you feel like being sure, run it again and make sure it's happy that time too.